The Gustav Mahler Society which in the 1990s restored and has now been running the composer’s birthplace at Kaliště near Humpolec and organising the Music of Thousands – Mahler Jihlava Festival, is planning large-scale international celebrations at Kaliště, Jihlava and other places in the Czech Republic for the years 2010 and 2011.

As part of the celebrations, with a number of towns and places in the Czech Republic plus organisations and institutions not only in the Czech Republic but also abroad participating, there will also be the ninth and the jubilee tenth international music festival Music of Thousands in 2010 and 2011. The Gustav |Mahler Society will be organising the festival in co-operation with the Statutary Town of Jihlava, the Highland Region and other partners. The festival programmes will first and foremost feature orchestral music by Gustav Mahler, but side by side with works by Anton Bruckner, Richard Strauss and Dmitri Shostakovich. Appearing at the celebration concert on 7th July 2010 at the Gustav Mahler birthplace at Kaliště near Humpolec will be the baritone Thomas Hampson who became an International Patron of the reconstruction and has since sung here in 1998 during the re-opening of this important heritage place. The world audience should be able to follow the celebrations by internet relays.

A ‘Mahler’ delegation led by Gustav Mahler’s granddaughters Marina and Alma, together with other artists including our own notable personalities, will take part in the unveiling of a statue of Gustav Mahler by the sculptor Jan Koblasa. This will be in Jihlava at a place where the local synagogue was burnt down in 1939. At the same time a memorial ‘Park of Gustav Mahler’ will be opened.

In 2011 as part of the Mahler celebrations there will be a large scientific conference in Jihlava, with such personalities as Donald Mitchell, Henry Louis de La Grange, Norman Lebrecht, David Matthews and others taking part.

The broad programme of the Mahler activities was launched at the fifth annual Music of Thousands Festival – Mahler Jihlava 2006, in co-operation with the Friedrich Rückert Society, and will continue with more activities. In September 2008 Prague and other places marked the jubilee of the world premiere of Mahler’s Symphony No. 7 which was played by the ‘Exhibition Orchestra’ (of which the fledgling Czech Philharmonic constituted an important part at the time) under the composer’s own baton.

More activities are in the pipeline, all with the aim of throwing light on Gustav Mahler’s ties with the area and culture of what is now the Czech Republic, on the national, religious and philosophical fabric of life in Central Europe, as well as clearing up a number of facts, legends and myths. 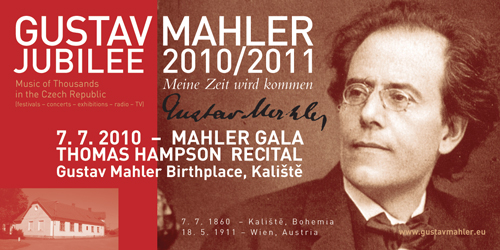